Ethereum vs Solana: which is better? 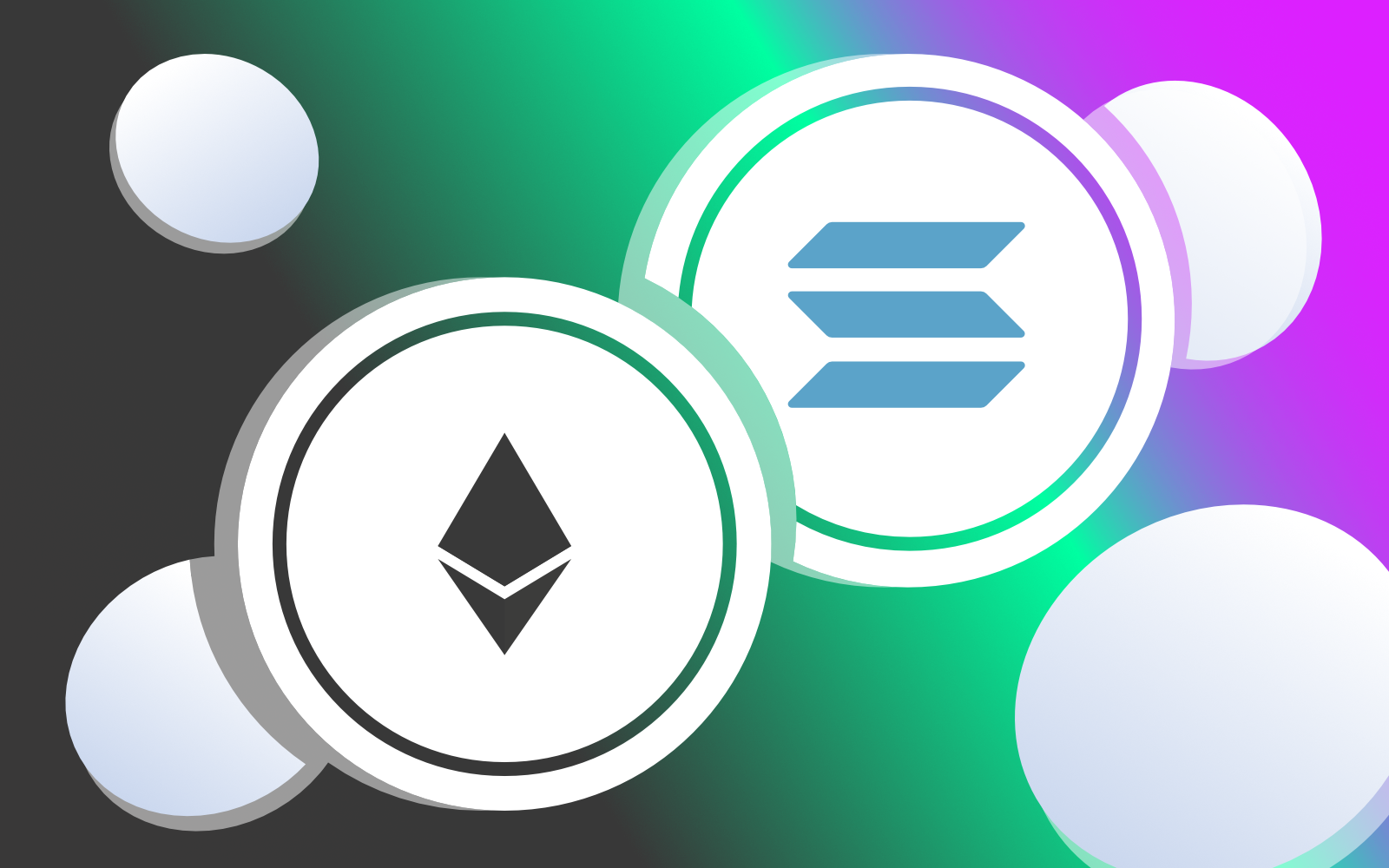 For years, speculation has been mounting over whether Ethereum would eventually overtake Bitcoin, and become the leading cryptocurrency by market cap. But it’s also worth thinking about the long line of so-called ‘Ethereum killers’, posing a threat from behind.

Of these, Solana is arguably the most popular. In early 2021, it was just one among several dozen altcoins buoyed by a bullish crypto market. Just a few months later, and it’s broken away from the pack and is being taken seriously as a challenger to Ethereum.

Why are both cryptocurrencies so popular?

Solana is emblematic of the ‘gold rush’ perception of crypto in general — early investors in the currency at the start of the year would have been able to make a hundredfold return on the stake. A parabolic rise of this kind is almost guaranteed to raise eyebrows — and attract investment.

The Ethereum network went live in 2015, having first been envisioned by designer Vitalik Buterin back in 2013. Buterin made the point that blockchain technology wasn’t just useful for dealing with money, but could be used in other applications, too — but that first, it would need to speak a slightly different language. Ethereum wasn’t the first altcoin, but it was the first to gain mainstream attention in the same manner as Bitcoin.

Solana’s popularity is built on many of the same technical foundations. The sudden explosion in price that it’s enjoyed over the last few years is undoubtedly self-reinforcing.

What is the purpose of Ethereum?

Ethereum is a programmable blockchain, set up to support a range of goals. We’ve already touched on smart contracts, but that isn’t the end of what Ethereum can do. The blockchain is able to facilitate the development of decentralised apps, and can form the basis for non-fungible tokens. Among the most popular application of the technology is DeFi, or decentralised finance. Ethereum’s compatibility with a range of apps makes it a go-to choice for many developers — and it will take something significant to alter that preference.

Naturally, you don’t need to have any interest in either of these functions to invest in Ethereum; the coin can be used as a straightforward (though volatile) digital commodity.

What is the purpose of Solana?

Solana was devised to address the problems inherent in scaling a blockchain. This is due to the rapid increase in the number of people taking an interest in crypto, and the bandwidth limitations restricting transaction throughput for those wishing to use a given blockchain. Using some clever technical trickery, Solana has come up with several fairly convincing answers to problems that have eluded other blockchain platforms.

Solana, like Ethereum, offers a basis for non-fungible tokens. These are digital versions of collectors items, like artworks, which have generated a great deal of excitement among digital creatives like visual effects artists and 3D modellers. The first move in this direction by Solana was Degenerate Apes, a collection of more than 10,000 portraits of apes which can only be purchased in SOL. The desirability of things like this can have a marked impact on the value of a given currency — and the trading volume of Degenerate Apes is in the tens of millions.

Like any ‘Ethereum killer’, Solana performs many of the same functions as Ethereum, and offers many of the same features. The emphasis of both coins is on the facilitation of smart contracts — which are basically programs that execute once a pre-agreed set of conditions have been fulfilled.

While Ethereum, for the time being, remains based in proof of work consensus mechanism, Solana uses a form of proof of history to cryptographically establish the passage of time between two events. It does this without relying on any central timekeeping authority, and instead by holding elections using proof of stake to determine who is the proof of history ‘leader’.

The award system, and the SOL coin, is rooted in Proof of Stake, which basically means that the more SOL staked by an individual, the more likely they will be to benefit from the system. Smaller stakeholders can also chip in SOL to big validators, and thereby receive a slice of the action. Consequently, even smaller holders can contribute right from the start.

Solana uses a form of Byzantine Fault Tolerance known as ‘Tower’ BFT. This allows forks in the chain to be rolled back, and allows those voting to more finely calibrate the risks associated with their decisions. These technical differences, internal to the chain, have gone a long way towards propelling Solana on its current upward trajectory. You can read more about them here.

What arguments are there to invest in Ethereum?

Ethereum is a proven cryptocurrency, having been established since 2015. For the time being, it enjoys superior mainstream recognition. Some Ethereum proponents would argue that many of the technical advantages of Solana come at the expense of decentralisation, which is not the case with Ethereum.

What arguments are there for Solana?

The transaction costs for Solana are negligible in comparison with Ethereum. Moreover, the currency offers vastly superior scalability. While we should expect these advantages to narrow as improvements to Ether are rolled out over time, for the time being Solana is the superior choice.

Solana has a technical advantage when it comes to transaction speed. While Ethereum’s ability to handle 30 transactions per second might look impressive when compared with Bitcoin’s seven, they’re both thrown into the shade by Solana’s ability to rip through around 65,000 during the same period.

This transaction speed is made possible using a kind of cryptographic time-stamping, which means that miners and validators don’t actually need to speak to one another in order to arrange the chain. As long as everything is stamped, it can be arranged after the fact. Hence, less bandwidth wasted on back-and-forth, and more efficiency.

With that said, we should also think about the proposed changes to Ethereum, which will be gradually rolled out in ETH 2.0. Among the things to be addressed is the transaction speed, which will be bolstered into the hundreds of thousands range.

The proof-of-stake consensus mechanism favoured by Solana also has environmental advantages over proof-of-work, which is extremely energy-inefficient, almost by design. This is one of the reasons that the crypto space has attracted such derision from mainstream media — the process of mining sucks up staggering amounts of energy, and if a truly distributed digital alternative is to prosper, then it will need to find a better way of achieving its goals.

In fact, we can see many of the perceived structural weaknesses in Ethereum being recognised in the ETH 2.0 proposals, including scalability and transaction costs. It may be, therefore, that it isn’t Solana, Cardano or Polkadot which ends up living up to the ‘Ethereum Killer’ billing — it might be Ethereum itself.

Further down the line, we might expect regulation of DeFi to have an impact on the value of either currency. This applies especially to larger governments like those of the US and China, whose decisions have more of an impact globally.

Moreover, any of the aforementioned coins, or a hitherto-unknown one that’s in the pipeline, might leapfrog both Ethereum and Solana to achieve the so-called Flippening (that is, overtaking Bitcoin to become market leader) against the odds.

If you’re looking to get a quick overview of the two currencies, you’ll find it here:

How to buy crypto

The easiest and most popular way of buying crypto is through an exchange. These are organisations that act as intermediaries between traders, ensuring that one can trade with the next without fear. Of course, they’re not an essential middleman, but they are a useful one.

You can use Cryptoradar to compare the various exchanges available in your location. You might assess your options based on the price of the coin (and, by extension, the fee being extracted by the exchange).

You might also consider additional features and security, and the testimony of other users. Once you’ve had a good experience with a given exchange, it’s likely that you’ll stick with it — but it’s still worth coming back to Cryptoradar to assess the other options available.