Cryptoradar Guide
What makes Bitcoin and Ethereum so popular?
What are the similarities and differences?
What is the purpose of the cryptocurrencies?
Why invest in Bitcoin or Ethereum?
The Flippening
Side-by-Side Comparison
How can I buy crypto?

Bitcoin vs Ethereum: which is better? 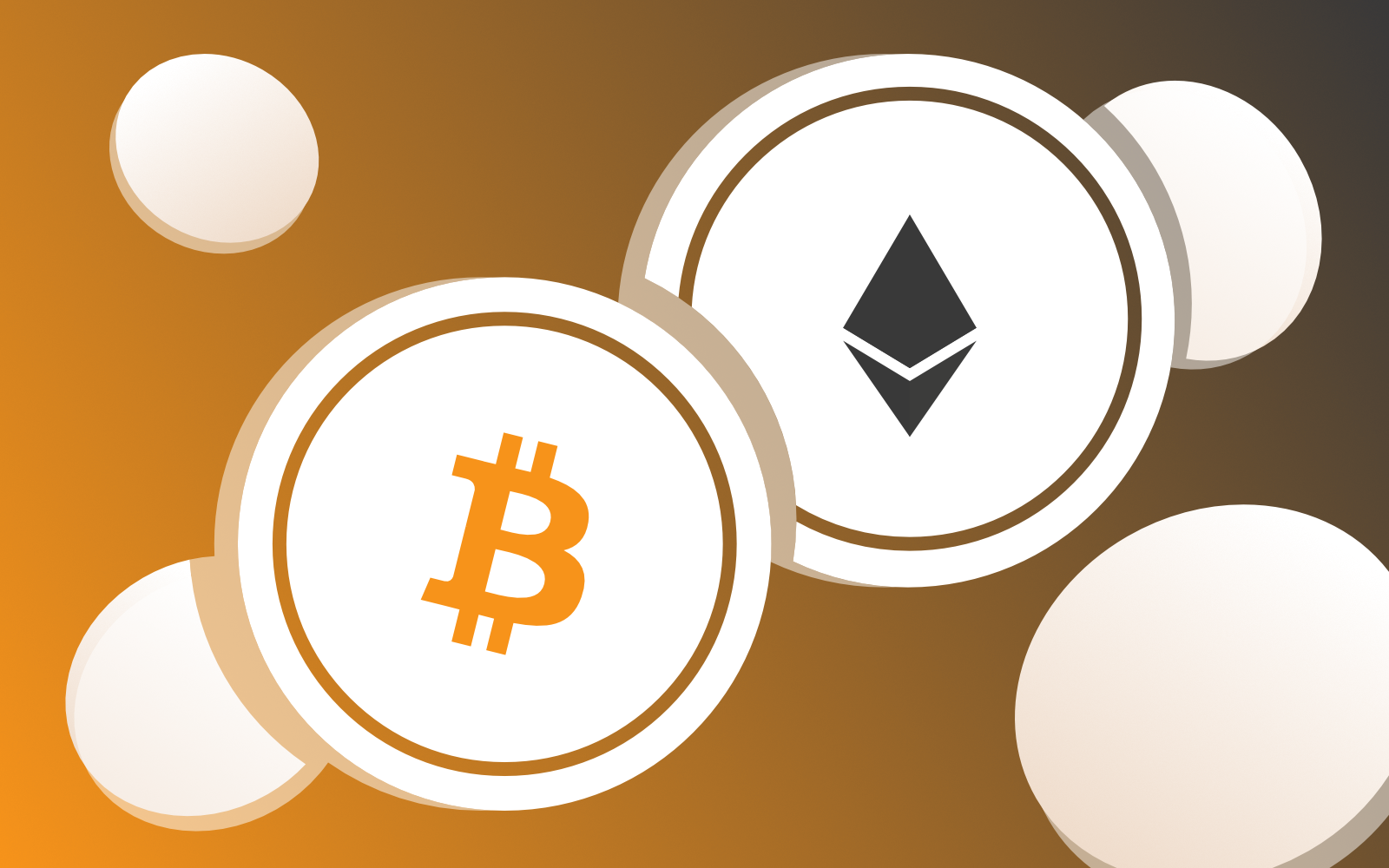 Even if you’ve only just delved into the murky waters of cryptocurrency, you might already have encountered two of the biggest fish: Bitcoin and Ethereum. The former is so widespread that it’s often taken to be synonymous with crypto at large. We’ve often asked questions like “what kind of bitcoin should I buy?”, which is testament to the sheer enormousness of the original cryptocurrency.

But Ethereum, increasingly, is also finding its way into mainstream parlance. It’s therefore worth spending some time comparing the two currencies, as the differences between them can tell us a great deal about the various altcoin out there.

What makes Bitcoin and Ethereum so popular?

So how have these coins broken into the mainstream, where others have not? It’s mostly a product of headlines, driven by eye-watering bull and bear periods for the currencies.

Cryptocurrencies are famously volatile, in part because of the self-reinforcing effect that their popularity can have. When the price of bitcoin rises, the demand for it surges, which pushes the price up even further. This effect might work in the opposite direction — but the headlines generated by surging bitcoin prices have cemented the ‘brand’ of the coin into common parlance. You might hear conversations about Bitcoin at a barbeque or around the family dinner table.

Thus, when most new investors begin to dabble in crypto markets, they’re more likely to recognize — and therefore invest in — Bitcoin.

This isn’t just true of newcomers, either. Experienced traders recognise that Bitcoin, and the systems that it relies on, has been put through a great deal more stress-testing than many of the altcoins on offer. Thus, Bitcoin is seen as a more reliable store of value.

Established coins like Ethereum and Bitcoin also have the major advantage of being accepted on a wide range of trading platforms compared with newer altcoins, which must prove their worth. Thus, you’ll have a harder time tracking down an altcoin to invest in, even if that’s what you’re looking for.

Both coins have a vast existing user-base, which, at the heart of it, is what makes their lead look nigh-insurmountable. That isn’t to say that an altcoin challenger won’t come along, but for the most part the smaller coins are used as hedges against shocks to the price of these larger ones.

What are the similarities and differences?

Bitcoin has been around for much longer than Ethereum. The former was launched in 2009, the latter in 2015.

Ethereum uses ethash, which is different to the SHA-256 used by Bitcoin. It’s not necessary to understand these technical differences to trade in either currency, but doing so can’t hurt.

Bitcoin’s market cap is around twice that of Ethereum, at around $900 billion dollars to $400 billion.

Bitcoin uses a consensus algorithm called proof of work. This prevents bad actors from jamming up the system with frivolous requests. When a transaction needs to be validated, an arbitrarily difficult mathematical problem must be completed by the verifying machine. This is what allows the network to function without the need for a central authority or third-party to ensure that everything is working.

Ethereum also uses the proof-of-work mechanism, but is set to transition to an alternative in the future: proof-of-stake. This sees verifying nodes put down an arbitrary amount of currency, which will be returned once it’s been established that the block being verified is not malicious. This incentivises validators to reject bad blocks and attest to good ones.

What is the purpose of the cryptocurrencies?

The underlying purpose behind each of these cryptocurrencies points to a significant difference. While Bitcoin was envisaged as a replacement for cash, which would allow everyone in the world to trade freely with one another without the need for banks, Ethereum was set up with something quite specific in mind. Ethereum is the basis for the exchange of ‘smart contracts’ between parties, and a decentralisation of the legal system. Its function as a store of value has emerged naturally over time, as more and more traders have been drawn to the coin, viewing it as a sensible alternative to BTC.

Let’s take a closer look at the reasoning behind each of these currencies.

What is Bitcoin for?

Bitcoin was first envisaged as a store of value — that is, a commodity which holds its value over time. It’s inherently deflationary, as there’s a fixed amount of it that can ever be mined, and the rate at which new coins are created will slow down at regular intervals thanks to a process called ‘halving’, which sees the reward for mining a new block slashed in half.

As it exists currently, Bitcoin is not stable enough as a store of value to act as a currency. Like just about every other cryptocurrency (with the exceptions being those designed to tie to the price of fiat currencies like sterling and the US dollar).

Bitcoin was envisaged as a means of avoiding many of the problems inherent in the modern system of money, such as the concentration of power into the hands of middlemen.

What is Ethereum for?

Ether, by contrast, is an example of a use-case blockchain system. It’s designed to facilitate the exchange of smart contracts, decentralised applications, and non-fungible tokens. With that said, knowledge of these uses isn’t necessary for those wishing to invest in ETH.

Ethereum is changing, with a phased introduction of what’s called Eth2. The existing network is running into scaling issues. There isn’t enough bandwidth to meet the voracious demand, and the more the network grows, the more effort will be required to run any given node. There are also environmental concerns attached to the proof-of-work consensus mechanism. For these reasons, upgrades like the Beacon Chain — which will at some point be merged with mainnet Ethereum — and the so-called ‘shard chain’ will be rolled out over time.

Why invest in Bitcoin or Ethereum?

People invest in BTC and ETH for all kinds of reasons. Some of them are ideological, but others are driven by rational self-interest. While the value of a fiat currency might diminish over time, the value of crypto has been steadily (and not-so-steadily) climbing. It’s for this reason that you might see Bitcoin as ‘digital gold’. It has many of the properties that make gold valuable, like scarcity, but it doesn’t come with the same physical weight and inconvenience.

Ethereum, as we’ve discussed, envisions to become the supercomputer for the digital age. With Ethereum, any real world transaction could one day be automated. NFTs, for instance, are digitally secured ownership rights. Right now, the use of NFTs may be limited to digital art, but in the future this smart contract based technology could eventually become a form of legal ownership for intellectual property such as patents, trademarks and even company shares.

When comparing these two currencies, it’s worth mentioning a hypothetical future event called ‘The Flippening’, at which Ethereum overtakes Bitcoin to become the largest cryptocurrency by market share. Depending on how you look at it, this transition might already be under way, as the gap between the two is steadily shrinking. There’s reason to think that the process will gain momentum as the point of flippening nears because investors might begin to jump ship in anticipation of the event, and thereby fulfil the prophecy.

Of course, there’s also reason to be skeptical that such a thing could ever happen, given the enormous advantages that BTC enjoys, and the size of its user-base. Of course, all of this speculation might ultimately be rendered moot, as there’s always the possibility that a hitherto-unknown altcoin might emerge from nowhere and flip both.

Need a TL:DR? Let’s run through the significant differences between the two coins.

How can I buy crypto?

The easiest way to buy cryptocurrency of any kind is via an exchange. These services will provide you with a safe way of trading with others. Different exchanges will allow you to buy and sell BTC and ETH at different prices, and in different parts of the world. You can use Cryptoradar to compare your options based on your own criteria.

Exchanges shouldn’t just be compared based on the price they offer, but on their security features and broader reputation. If you’re trading large volumes of crypto, then investing in an offline wallet will safeguard your coins.