Ethereum vs Cardano: which is better?

Bitcoin dominated the early crypto news cycles, but innovative altcoins like Ethereum and Cardano have been stealing the spotlight lately. 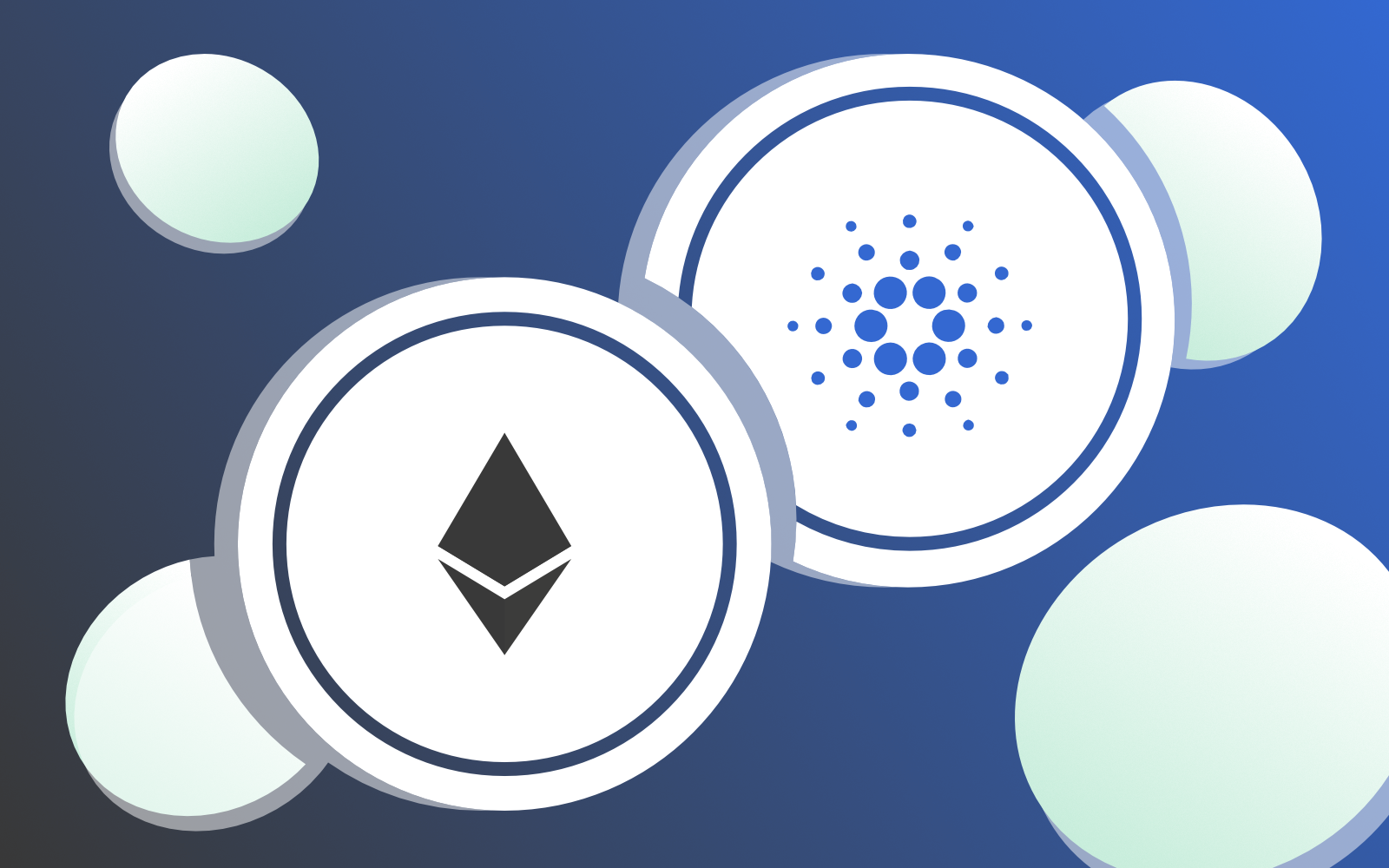 Bitcoin relies on proof of work (PoW) to secure its transactions. PoW is a consensus mechanism that relies on miners solving complex cryptographic puzzles to mint the next data block on the Bitcoin blockchain in exchange for a Bitcoin reward. PoW is an extremely energy-intensive process.

Cardano uses an improved low-energy algorithm called proof of stake (PoS) to secure transactions on its network. Validators, who own large stakes of the currency, ensure transactions are legitimate in exchange for a small fee. Unlike PoW, PoS systems don’t require large amounts of energy or computing resources.

If you take a look at what they offer, you’ll see that Cardano and Ethereum are similar in many ways — both include similar features such as smart contracts, decentralised applications and coin staking.

Yet each network has different ideas about how to proceed, and it’s not unlikely one of these altcoins will come to dominate the market in the future.

Although Ethereum wasn’t immediately popular, nor was it the first altcoin, it was the first cryptocurrency besides Bitcoin to receive mainstream media attention.

Ethereum is a decentralised blockchain network on which users interact through smart contracts. A white paper on Ethereum was published by Ethereum founder Vitalik Buterin in 2013 and the network first went live in 2015.

Ethereum is the go-to platform for decentralised applications, or Dapps. Anyone can build and run a Dapp on Ethereum without interference from downtime, fraud or third parties.

Rather than paying a monthly fee to build a Dapp on the Ethereum blockchain, developers instead power their projects using Ether.

Ether (ETH) is the cryptocurrency of the Ethereum network. It’s currently the second most popular cryptocurrency after Bitcoin. In August 2015, one ETH cost just $1.25. At its record high in Map 2021, ETH reached $4,356.

Like Bitcoin, Ethereum presently relies on PoW to process transactions on its network. But developers are planning to move the network to a PoS mechanism toward the end of 2021 or early 2022. Upon completion, the PoS mechanism should reduce the network’s energy usage by 99.95%.

In addition to Dapps, developers can also build new cryptocurrencies using the Ethereum network. For example, MakerDao, Uniswap, and Chainlink.

Cardano was founded in 2017 by Jeremy Wood and Charles Hoskinson. Both played a part in the founding of Ethereum.

Jeremy Wood and Charles Hoskinson were two of Ethereum’s founding members. Wood approached Hoskinson in 2015 to form IOHK (Input Output Hong Kong), which would be an engineering and research company focusing on cryptocurrencies.

Cardano’s native token, ADA, was named after Ada Lovelace, a 19th-century mathematician argued to be the first computer programmer. You can  use ADA to transfer value without requiring a third party — much like other cryptocurrencies.

But the Cardano team have loftier goals than building a better Bitcoin. Cardano already has smart contract functionality and could one day overtake Ethereum as the Dapp development platform of choice.

The key difference between Cardano and Ethereum is the former’s research-driven approach to development. The Cardano team heavily relies upon academic approval to ensure users trust the platform’s underlying mechanics.

Additionally, Cardano was built using a PoS mechanism from the start and therefore has the potential to scale more easily than Ethereum.

Why is Ethereum popular?

Decentralised finance, or DeFi, is one of the most popular developments that came from Ethereum. DeFi is an umbrella term that covers decentralised apps and projects related to finance — lending in particular.

DeFi applications negate the need for financial intermediaries like banks or brokers. Users can borrow and lend money through smart contracts.

Smart contracts are programs that automatically execute when the terms of the contract are met. They automate verification processes through code. For example, releasing money into someone’s bank account on the same day every year — like their birthday.

Ethereum also gave rise to non-fungible tokens (NFTs). Every NFT has a unique signature and can’t be duplicated, making each token one of a kind. The most popular NFTs are digital artworks, but investors speculate they could one day be used for proofs of identity or property deeds.

Why is Cardano popular?

Cardano was designed to use PoS from its launch, and the mechanism is verifiably secure with rigorous security guarantees. Cardano was the first blockchain protocol based on peer-reviewed research.

Cardano’s PoS mechanism makes the network far more environmentally friendly than Ethereum and most other cryptocurrencies. This has already attracted many green investors.

The network is far more scalable than Ethereum and therefore could overtake it as the smart contract platform of choice.

The Cardano network can, in theory, run as many transactions as you could ever need without slowing down due to a bottleneck.

Why invest in Ethereum?

Ethereum’s parabolic price rise in the seven years since its conception has caught the attention of many institutional investors. The European Investment Bank recently issued a €100m digital bond via the Ethereum blockchain.

Additionally, the S&P DJI launched the first cryptocurrency indices, including an Ethereum Index (Ticker: SPETH) that tracks ETH, which could attract traditional investors who would have otherwise steered clear of cryptocurrencies.

Some bricks-and-mortar retailers have started accepting ETH as payment for goods and services. Christie’s auction house accepted a $69.3m payment in exchange for an NFT artwork by the artist Beeple. Should more retailers choose to accept ETH, it will certainly lead to further growth in value.

The London hard fork went live on August 5th, which marked the final step before the Ethereum network fully migrates to a PoS system.

Unlike most other cryptocurrencies, ETH is uncapped, with annual inflation at an estimated 4%. By continuously creating ETH, the developers had permanently capped its price growth.

But when the London hard fork went live, the Ethereum network started burning thousands of units of ETH all day every day. This means the price for each ETH should increase more over time — ‘should’ being the operative word.

Why invest in Cardano?

Wood and Hoskinson built Cardano with long-term, sustainable growth in mind. As nearly all new developments on the platform go through a peer-review process, new investors have a better guarantee of the platform’s efficacy.

Unlike Ethereum, Cardano has a hard cap on the number of tokens on its network, which creates artificial scarcity — and therefore value. As the network becomes more popular over time, ADA holders should enjoy more consistent growth.

Staking your ADA — where you delegate your tokens to other users in exchange for a reward — is quick and easy to set up…and profitable. Staking ADA tokens today will earn you about 4.6% interest pa.

The price growth from a scalable, environmentally-friendly network combined with the interest earned from staking could make Cardano a very wise investment.

How to buy Ethereum and Cardano